Ford, which is due to report its first-quarter earnings on Wednesday, hired Jim Hackett as chief executive last May, but he has yet to detail his overall turnaround plan.

DEARBORN, Mich. — When Jim Hackett took over as chief executive of Ford Motor, he was charged with revitalizing a company suffering from slumping profits, rising costs and an uncertain outlook.

In the 11 months since then, Mr. Hackett has shuffled Ford’s executive ranks and outlined plans to introduce new sport-utility vehicles and electric cars. Other steps in his strategy, however, have been slow in coming.

New models — including updated Escape and Explorer S.U.V.s — are on the way, but most won’t begin arriving until the second half of 2019. The company’s stock price is still lagging. And while Mr. Hackett has vowed to cut engineering costs and improve Ford’s “fitness,” he has yet to specify how he’ll do that, what his overall turnaround plan entails, and what financial targets Ford hopes to hit.

The lack of detail has frustrated Wall Street analysts, and the tension spilled into the open during a conference call in January. In the call, Mr. Hackett noted that Ford was working on six efficiency initiatives but offered no specifics.

“When are we going to know these six?” Adam Jonas of Morgan Stanley asked. “Because I asked you a pretty straightforward question. You’re alluding to the six in your slides. You’re clearly not willing to talk about them.” Then, with a tone of exasperation rarely heard in such calls, Mr. Jonas added, “That’s a problem, Jim.”

The slow rollout of a recovery plan has added a new layer to the challenges facing the No. 2 American automaker. It has trouble on several fronts: Operations in Europe, India, and South America are struggling; costs for key materials like aluminum and steel are rising; sales in China have stalled; and its model line is short on the new types of S.U.V.s and trucks that buyers are snapping up in the United States.

In a recent note to his clients, Mr. Jonas said investors were becoming skittish about Ford and saw General Motors and Fiat Chrysler as better bets, largely because of the uncertainty of how Mr. Hackett intends to fix the company. “Ford is seen as carrying unnecessarily high levels of risk and little transparency,” he wrote.

Ford is due to report its first-quarter earnings on Wednesday and is expected to offer some new information about cost-cutting. But investors probably won’t see a full-blown turnaround plan until September, three people familiar with the matter said.

Senior executives are debating the elements of a comprehensive plan to streamline Ford’s internal operations and rebuild profitability in the company’s North American business, and job cuts cannot be ruled out, these people said. They said a key goal would be lifting North America’s profit margin to near 10 percent by 2019 or 2020. Last year, Ford North America’s margin was 8 percent, well short of the 10.7 percent that General Motors achieved.

Shrinking or selling unprofitable foreign operations could also be part of the new strategy, the three people said, and the company is also discussing whether to continue selling small and midsize cars in the domestic market. Ford currently loses money on the Fiesta, Focus and the Fusion sedan, they said.

Ford’s top executives expect to present the plan to the company’s directors at the board’s July meeting, these people said. The July gathering is typically when directors spend several days at Ford to give its business strategy a thorough review, and test-drive new models the company is preparing to introduce.

A Ford spokesman, Bradley Carroll, declined to comment on the board’s deliberations. But he added that “the entire company is intensely focused on improving the operational fitness of the business to deliver profitable growth with improved returns.”

Mr. Hackett, 63, has signaled that he is wary of rushing into a new strategy. “If you think too quickly, and you’re wrong,” he told reporters in March, “you get this joy of making it to market but then you’re always correcting.”

Just two years ago, Ford was cruising at high speed. Mr. Hackett’s predecessor, Mark Fields, guided the company to record earnings in 2015 — nearly $11 billion in pretax profit. Brimming with confidence, Mr. Fields approved several ambitious projects. He set off a hiring spree to stock up on software developers, engineers and other executives — talent that he believed Ford would need to compete as electric and self-driving cars reshape the auto industry.

Ford laid out a billion-dollar plan to remake its Dearborn, Mich., locations into a high-tech, Silicon Valley-like campus. The company invested in ride-sharing and other start-ups in a bid to turn itself into a “mobility” company. Mr. Fields and Ford’s chairman, William C. Ford Jr., called on a director — Mr. Hackett — to join the management ranks and run the mobility activities. It also introduced a $400,000 super sports car, the Ford GT.

But when Mr. Fields couldn’t move fast enough to head off slippage in Ford’s profits, the board dismissed him last May and handed the reins to Mr. Hackett, a former chief executive of Steelcase who is credited with turning around the office-furniture maker. And analysts question whether the vestiges of the Fields strategy will ever pay off. 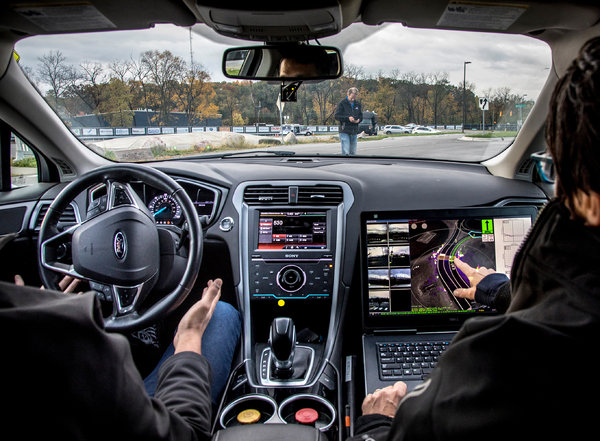 Can Ford Turn Itself Into a Tech Company?

Its very name was synonymous with the 20th-century economy. Now it’s trying to catch up with Silicon Valley on self-driving cars.

The headquarters makeover might make Ford a more enticing place to work years down the road, but won’t generate the revenue growth the company needs now. The mobility businesses aren’t making money yet. And while the GT sports car turns heads, Ford is selling only 250 a year. “You have to ask the question: Is it really getting you showroom traffic?” said Brian Johnson of Barclays Capital.

Ford’s aluminum-bodied F-150 pickup truck, introduced in late 2014, has been a strong seller and a big generator of profits. But other parts of its core business have been sputtering. As American consumers gravitated away from cars and toward trucks, S.U.V.s and roomy but fuel-efficient S.U.V. cousins known as crossovers, Ford began losing money on cars and allowed its S.U.V. and crossover lineup to age. The current Explorer S.U.V. was introduced in 2010, and the Escape in 2012. Competing models from Toyota, Honda, G.M. and others have since been redesigned and feature newer technology.

“What they should have done is invest in the new crossovers in 2015 and 2016,” said David Whiston, an analyst at Morningstar. Crossovers, he noted, now make up a third of the American car market.

Ford also decided to drop its small pickup, the Ranger. But it is now scrambling to introduce a redesigned version of the Ranger after realizing it was losing sales of small pickups to competitors.

Mr. Hackett and his executive team have presented overviews of his vision for Ford on Wall Street and elsewhere on several occasions. At an event in March, they promised to introduce a slew of new S.U.V.s, including high-performance and off-road models. But his presentations haven’t generated much enthusiasm with investors. Ford’s stock is trading at about $11, slightly below where it stood a year ago.

Mr. Whiston said he was willing to wait for Mr. Hackett to present a comprehensive plan. But he added, “It is strange that it’s been almost a year and we don’t have any concrete details.”

Soon Only One Blockbuster Will Be Left in the United States

From Mexico to the U.S., a Nafta Tale of Two Truckers